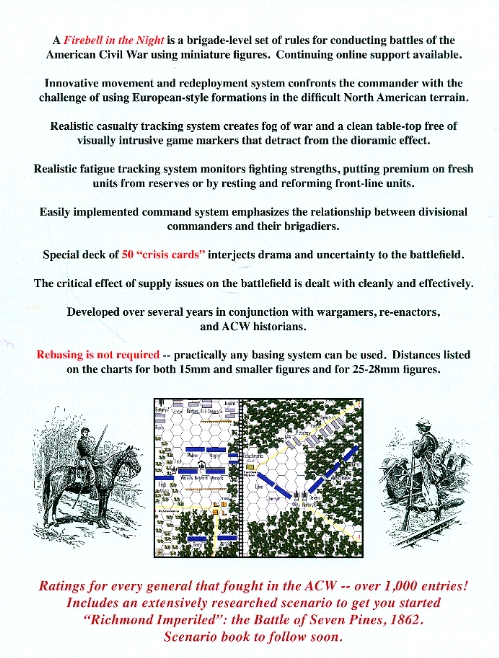 Greetings-
A Firebell in the Night is a brigade-level set of rules for conducting battles of the American Civil War using miniature figures.

“Infantry and Cavalry are at the Brigade level, in some cases very small brigades might be combined for game purposes. Example might be Caldwell’s II Division after the heavy losses on July 2nd Gettysburg.  Artillery is at 6 gun tube battery per base.”

Innovative movement and redeployment system confronts the commander with the challenge of using European-style formations in the difficult North American terrain.

“As a Divisional leader, the formation of your Brigades and the terrain they are in will determine not only their movement but the friction of battle, moving and changing formation in difficult terrain costs battle effectiveness. The Command relationships of Corps, Division, and the Brigadier leading his men into battle are found important on the table top”

“What is old is new, this game does use paper and pencil, not for some, but is not a heavy project, we have templates that give a format that is easy to track. Fog of war is at a level not found in many games, what is the enemy strength? With no Disorder or Staggered markers, a commander must judge the situation to “best guess” the level of the enemy battleline. You might know they are hurt, but how bad? You know they are fatigued, but how stressed?”

“Units can really get hurt without taking large loses, the friction of battle can wear on them, they will need time for the unit officers to reorder the ranks, for the men to rest and catch their breath, for the straggers to get back in position. A fresh Brigade can push back that larger brigade that has been in the fight”

Easily implemented command system emphasizes the relationship between divisional commanders and their brigadiers.

“Command and Control is represented, but without the use of written orders, we focus on their administrative ability -multi-tasking the demands of command, their effect on the men as Morale, and their skill leading men into the danger zone. The system will give you the feel of the superior Morale boost of Hancock as a Corps commander at Gettysburg, the fighting Hood leading the Texas Brigade into melee, or Cleburne leading his Division into attack.”

Special deck of 50 “crisis cards” interjects drama and uncertainty to the battlefield.

“With four years of war, the random is often seen, Ammo issues, losses of leaders, explosion of limbers, confusion with orders, many things will go wrong. Manage Chaos…”

The critical effect of supply issues on the battlefield is dealt with cleanly and effectively.

“Ammo use is a factor, at times units might be pulled out of the line of battle to reform and refit with ammo”

Developed over several years in conjunction with wargamers, re-enactors, and ACW historians.

Rebasing is not required — practically any basing system can be used. Distances listed on the charts for both 15mm and smaller figures and for 25-28mm figures.

“With this figure scale and ground scale, battles like Bull Run I can be played on a 4′ by 4′ table top with troop counts that are within the reach of many gamers.”

Ratings for every general that fought in the ACW — over 1,000 entries!

Thanks for your consideration,  John